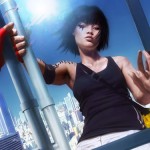 I don’t like what Mirrors Edge does to me. It captures my most obsessive side. The part of me that is determined to take every jump perfectly. My problem is that I don’t seem to be good enough at it. I am unable or unwilling to spend the time to commit every minutia of every course to memory to enable me to actually be good at it. Perversely, I don’t care. Plowing on, repeating sections, furious at my own ineptitude but enjoying it none the less.

The reasons all of the irritations never detract from the games appeal for me is that is always, unquestionably my fault when some thing goes wrong. Developer Dice’s parkour simulator gives you all the tools you need to navigate their aerial play grounds. Once you get the hang of the tools they give you there is only your own imagination to blame for not meeting even the most modest of goals set for you by the game.

When Dice take away the fantastic parkour control the game suffers. It’s strange that in a game for the most part so uncompromising in its vision that they seemed unable to bring themselves too eradicate the use of guns. It’s infuriating. When engaging an enemy your in-game persona Faith is robbed of all of her grace and speed. It is the equivalent of going off the track in a racing game, except here they are an unavoidable element of the game. 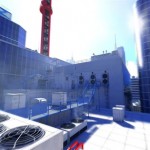 Dice’s problem is that they seem to have been preoccupied creating a sense of motion and vertigo. Everything has been designed to facilitate your movement and teach you how to best move though the environment towards your goal. In the best cases this preoccupation leads to the beautiful stark environment and locals. Conversely it is when the game tries to be more than a parkour play ground that it stumbles. Combat and the story both seem like an after thought, included to up ease EA’s marketing department who couldn’t work out how to push the game.

Mirrors Edge is a game which a victim of its own ambition and marketing. Vying for attention with established franchises and genres it was quickly over looked in the holiday deluge. Combine this with mediocre critical opinion due to elements which feel superfluous to the intended experience and it was destined to under achieve. 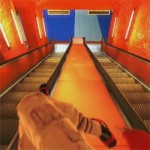 Sadly this means many who could love the game may never play it. Platform gamers will think it’s a first person shooter. Racing game fanatics who desire nothing more than to find the perfect line will pass this by. But these are the groups Mirrors Edge is for. Shed the story, ignore the combat, focus instead on the time trials and you are left a game mechanic which is hardcore gaming joy. And it is ripe for downloadable content, environments and routes are all this game ever needed to be and it will provide just that.